If Glacier is the “Crown of the Continent”, then Logan pass has to be the crown’s master jewel.

At just over 6000 feet high, this area sits right in the middle of the continental divide and was once under massive glaciers that eroded the mountains just enough to form the pass that now houses a visitor center and one of the best hikes in all of Glacier.

The area is extremely easy to reach via the going to the sun road, and we were lucky enough to have it to ourselves thanks to the Reynolds creek fire which earlier had shut down the east access point to this location.

So precious and delicate is this area, that the National Park Service created a boardwalk which takes you about 75% of the way to the overlook so that the massive crowds do not trample the fragile alpine meadow environment.

In fact, there is absolutely no off-trail travel allowed with the exception of a few routes for those that wish to climb Mount Reynolds or Mount Oberlin.

There is also a route to the bottom of the hanging valley that holds Hidden Lake. Beyond that, everything is off limits and with good reason: the crowds are simply out of control in this area and if allowed to roam around, they could easily turn everything to mud.

The day of our visit, Logan pass had just opened. We were some of the first few visitors allowed in the area. The crowds soon descended and the area was again shut down to new visitors to ensure road safety. Thankfully, those that had made it in before the road closed again, were allowed to stay. We spent all day there … twice.

The first day was quite windy and cold. Emma was on her backpack fully equipped with wind protection and sun protection. This is the same setup we used for Grinnell during much worse weather and she had been just fine. So we knew we were ready to face anything but a snow storm.

Turns out it got hot just an hour later and we had to open up her shelter a bit to let her out. 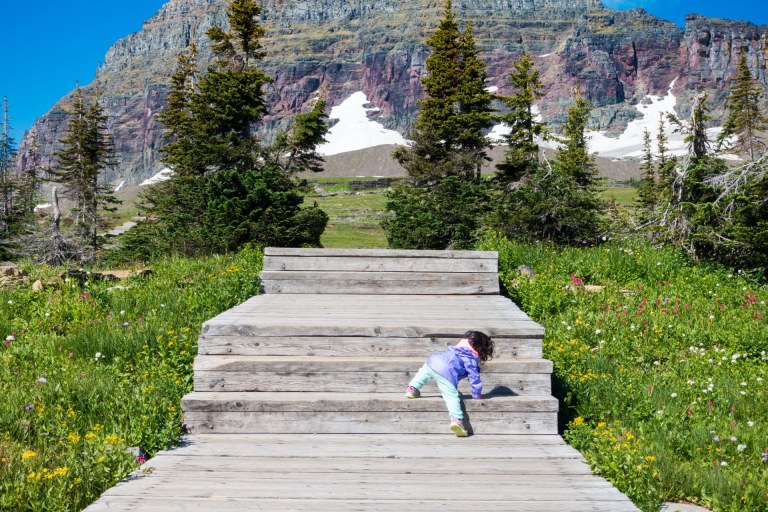 Not shown in these pictures is the first crisis of the day: Emma got a splinter from climbing all those stairs. Worse of all, we were almost at the end of the boardwalk. Thankfully we had a first aid kid which came with a splinter kit, but we didn’t realize we had all we needed until we were back at the ranger station.

So we had to go up those stairs…again!

But that was ok.  We didn’t come here to sit down and enjoy the scenery.  We make here to experience it so up we went again!

Next post will be about The Highest Garden in Logan Pass!

Mary Goes Places is a blog by Mary Sobrado. Copyright © 2017 . All Rights Reserved. Unless noted otherwise.